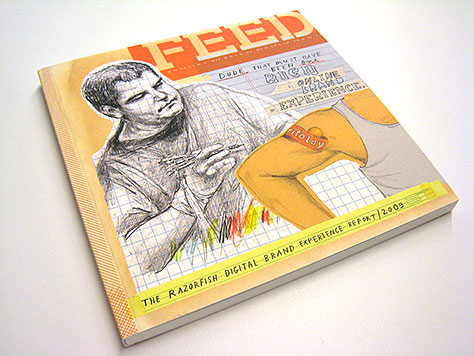 FEED 2009 has now been released and I feel privileged to have been a part of this one. If you haven’t already checked it out, please do so. The report and findings are very compelling and eye-opening. [Download PDF]

I wanted to share a little bit about the process we went through in designing the new report.

When my friend and colleague Garrick Schmitt first approached me, he already had an editorial direction in mind. He realized the data was so profound that the usual packaging of articles around the report would actually take away from it. So he wanted a smaller format with less content. He referenced books by Marty Neumeier: simple layout, large type, lots of infographics. The theme for the book came down to “customer engagement.” The data shows that when brands engage with customers in an experience of some kind (like an event, contest, etc.), ninety-six percent (96%) of their customers are more likely to consider, buy from or recommend that brand. Ninety-six percent. You never see a number like that in a survey. (To get that number, add up the sometimes/usually/always percentages for the consider, purchase and recommend results.)

So the answer was obvious in my mind. The design had to be simple (and elegant) but it really had to have an organic touch; it’s about the customer after all. I started thinking about Darwin’s journal and his observations and drawings of animals. I toyed with having the whole book typeset in a font I could make from Garrick’s handwriting, accompanied by scientific drawings of consumers. As soon as I thought about looking at illustrators who had a realistic style, someone immediately came to mind. Earlier in the summer I worked with a freelance copywriter named David Fullarton who was also a talented illustrator/artist. His work combines collage with portraiture and witty copy. His style would be the foil to the business-speak and myriad bar graphs and pie charts. He was perfect.

When I briefed David, I gave him a draft of the report and some loose direction. What he came back with was sheer genius. Because of his copy in conjunction with his art, the illustrations became another layer of commentary about the state of our industry and even our hyperconnected society. Yelpers are not only reviewing restaurants, but also doctors and schools. It doesn’t seem far off that they might be reviewing police officers in the future. 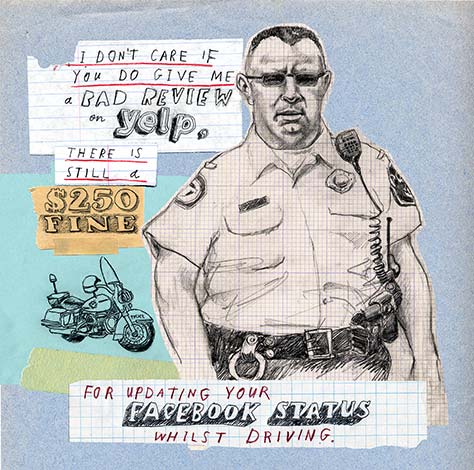 Meanwhile, I took another look at the nameplate for FEED. Last year’s design element of the small rectangular bars was inspired by the holes in computer punchcards. This year, I took the idea a little further by incorporating the actual shape of the punchcard and making the name a part of that. 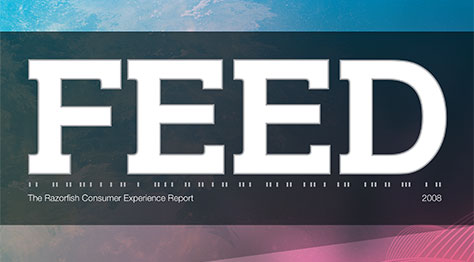 Garrick and I also talked a lot about the format of the physical book. He liked the idea of putting it up on Blurb for anyone to order their own copy. The small 7×7 size felt right for the amount of content we had. In addition to Blurb, we have also offset-printed 2,000 copies of the book. For this I chose a natural white cover stock for the interior pages which alludes to Moleskine sketchbooks and fits well with David’s illustration style. And we even made temporary tattoos of the back cover illustration.

At Razorfish most of my days are filled with high-level, large-scale strategizing or pushing tiny colored squares around on a screen. It’s always nice to work on a small project and make something that can be felt, picked up and even smelled. I hope you enjoy looking at it as much as I have enjoyed making it. 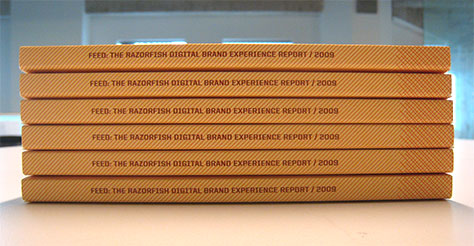