I'm really proud to announce that DesignScene for iPad has shipped today. From idea to release, it's been about a year in the making. Here's a little trailer I made in case you missed it:

I'll be frank and say that this app was really made for me. Like many designers I spend a lot of my time going from website to website looking at stuff and reading up on trends. I eventually started using RSS feeds but even my feeds got unwieldy. I dreaded opening up Google Reader and seeing "1000+" unread items.

When Apple announced the iPad 12 months ago it struck me that this device was the perfect thing to visually browse through all of my design-related feeds. It didn't take me too long to sketch and comp up something. 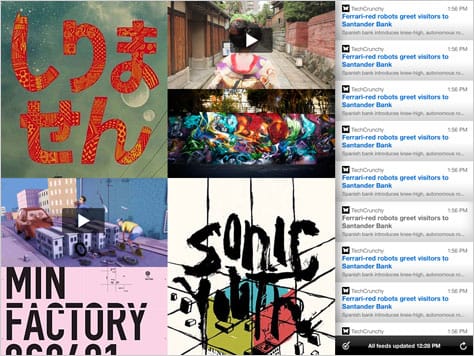 Of course I am just a designer and had zero Objective-C skills whatsoever. I can do simple HTML, CSS and even PHP, but real programming languages elude me. I knew I had to find a development partner. Problem is that there are tons of people like me with an idea, while developers are in high demand. I asked my network of friends and contacts, posted on Craigslist and BuildItWithMe but didn't really find anyone. I had a couple of meetings with friends of friends who were iPhone developers but they had their own objectives. Finally I got in touch with an old friend who was working on his first iPhone app.

I presented my idea to David and he liked it. We decided to go to iPad Dev Camp which took place a week after the iPad shipped and just a couple of weeks after David and I initially talked. We built the prototype for DesignScene at the camp (and received an Honorable Mention). We were off to a great start.

The reality of day jobs and personal lives slowed progress down as we got into the spring and summer of 2010. But in the fall as chatter of curated content emerged we kicked ourselves into high gear. David worked on functionality (there's a lot of backend processing that actually happens so that the app is as fast as it can be) and I worked on reaching out to sources to get official permission.

Fast-forward to today, and DesignScene is now available for purchase on the App Store. We've worked incredibly hard on this, sweated all the details (there's actually a maintenance upgrade that we released hours after 1.0.0 went on sale), and are really proud of what we've accomplished. Of course we could not have done this without the immense and loving support from our families. A million thanks to our wives and kids for putting up with our late night hackathons.

We are going to keep working on to improve DesignScene (we have some neat features we've been thinking about) but we're also going to think about other apps. Stay tuned and wish us luck!

David's side of the story