I have longed cringed at how the mainstream media reports on the technology industry to the public. From use of randomly-selected synonyms to just downright misunderstanding of particular technologies, it’s sort of embarrassing to the reporter (usually someone who calls themselves a “technology reporter”) and the publication.

The latest examples come courtesy of The New York Times. I was alerted to this via a piece on BGR by Yoni Heisler titled, “The New York Times’ latest Apple hit piece is embarrassing and downright lazy.” Disclosure: I am a subscriber to The Times because I support their journalism. Their political reporters in particular have done a tremendous service to our country over the last couple of years. I usually trust what The Times writes about politics because I am not an expert in it. But the two pieces mentioned by BGR, about screen-time apps, and the editorial about Apple’s supposed monopoly are downright silly, because I do know a thing or two about technology and Apple. 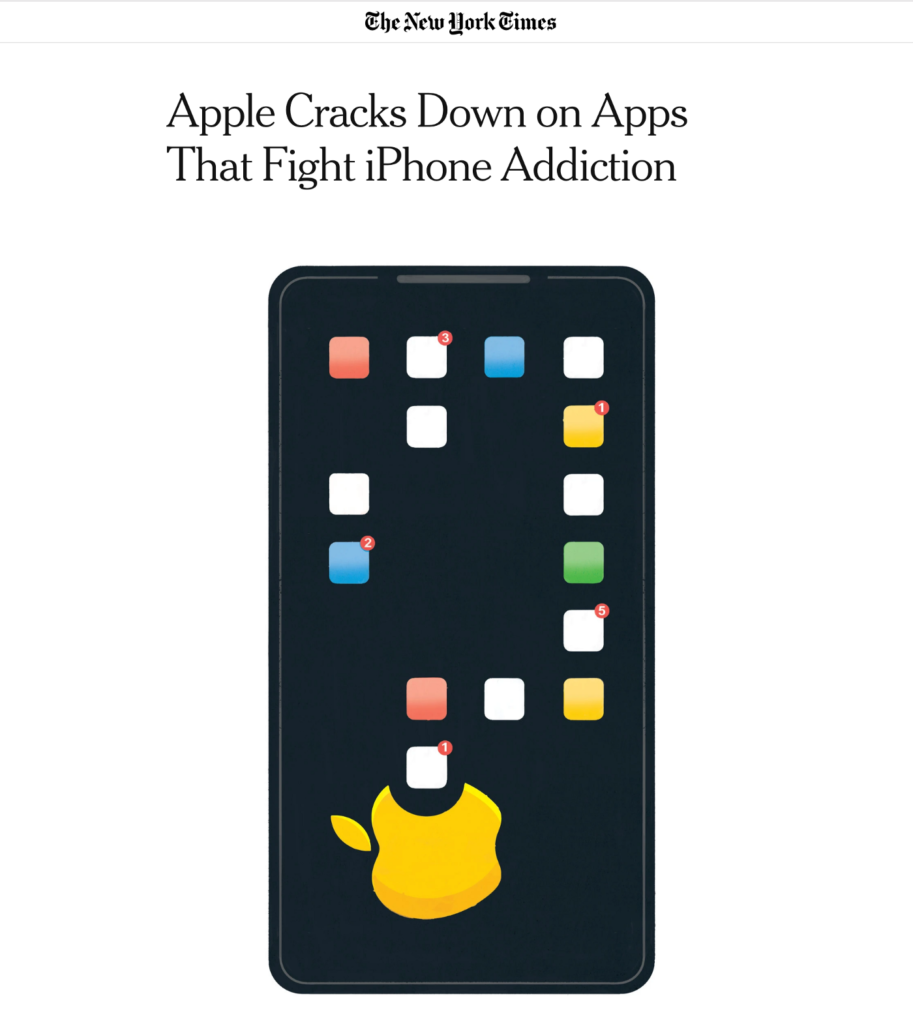 The premise of the article is that Apple has “removed or restricted at least 11 of the 17 most downloaded screen-time and parental-control apps” over the past year. There are quotes and POVs from app developers and parents, and there are a couple quotes from Apple defending its actions. This is the full quote of what they printed from Phil Schiller, Apple’s marketing chief:

In response to this article, Philip W. Schiller, Apple’s senior vice president of worldwide marketing, said in emails to some customers that Apple “acted extremely responsibly in this matter, helping to protect our children from technologies that could be used to violate their privacy and security.”

When the article broke, an Apple customer wrote to Tim Cook who had Schiller respond (emphasis mine):

Unfortunately the New York Times article you reference did not share our complete statement, nor explain the risks to children had Apple not acted on their behalf. Apple has long supported providing apps on the App Store, that work like our ScreenTime feature, to help parents manage their children’s access to technology and we will continue to encourage development of these apps. There are many great apps for parents on the App Store, like “Moment — Balance Screen Time” by Moment Health and “Verizon Smart Family” by Verizon Wireless.

However, over the last year we became aware that some parental management apps were using a technology called Mobile Device Management or “MDM” and installing an MDM Profile as a method to limit and control use of these devices. MDM is a technology that gives one party access to and control over many devices, it was meant to be used by a company on it’s own mobile devices as a management tool, where that company has a right to all of the data and use of the devices. The MDM technology is not intended to enable a developer to have access to and control over consumers’ data and devices, but the apps we removed from the store did just that. No one, except you, should have unrestricted access to manage your child’s device, know their location, track their app use, control their mail accounts, web surfing, camera use, network access, and even remotely erase their devices. Further, security research has shown that there is risk that MDM profiles could be used as a technology for hacker attacks by assisting them in installing apps for malicious purposes on users’ devices.

When the App Store team investigated the use of MDM technology by some developers of apps for managing kids devices and learned the risk they create to user privacy and security, we asked these developers to stop using MDM technology in their apps. Protecting user privacy and security is paramount in the Apple ecosystem and we have important App Store guidelines to not allow apps that could pose a threat to consumers privacy and security. We will continue to provide features, like ScreenTime, designed to help parents manage their children’s access to technology and we will work with developers to offer many great apps on the App Store for these uses, using technologies that are safe and private for us and our children.

Here is a layman’s summary of the above. The parental control apps that Apple kicked off the App Store were using a technology intended for large corporations to control their company-owned devices. This technology gives the corporations purview over, and access to all their devices’ location info, app usage, email accounts, web history, camera usage, and network access, and can remotely wipe their devices. In other words if an end-user installed one of these parental control apps that used MDM technology on their child’s phone, that app developer had access to all that information, and would be able to control and wipe that phone.

The Times and the general media have been lambasting YouTube, Facebook, and Twitter for allowing users and other entities to stay on their platforms and abuse their policies. From hate speech (white nationalists, Alex Jones) to huge privacy gaffes (Cambridge Analytica), the media and the public have demanded these companies take responsibility and action, and prevent such episodes from happening again.

And yet, when Apple does take action here—when about a dozen or so companies release so-called parental control apps on the App Store using Apple technology in a way that violates its policies and gives access to thousands of iPhones belonging to kids, The New York Times has a conniption.

Apple does not have an issue that there are apps that compete with its own apps in the App Store (Apple Music vs. Spotify, Pandora, SiriusXM, iHeartRadio, SoundCloud; Safari vs. Google Chrome, Opera Mini, Firefox Focus). That’s what a vibrant developer-centric marketplace is: competition. But when an app violates its policies, Apple should be able to act.

Who Owns a Marketplace? 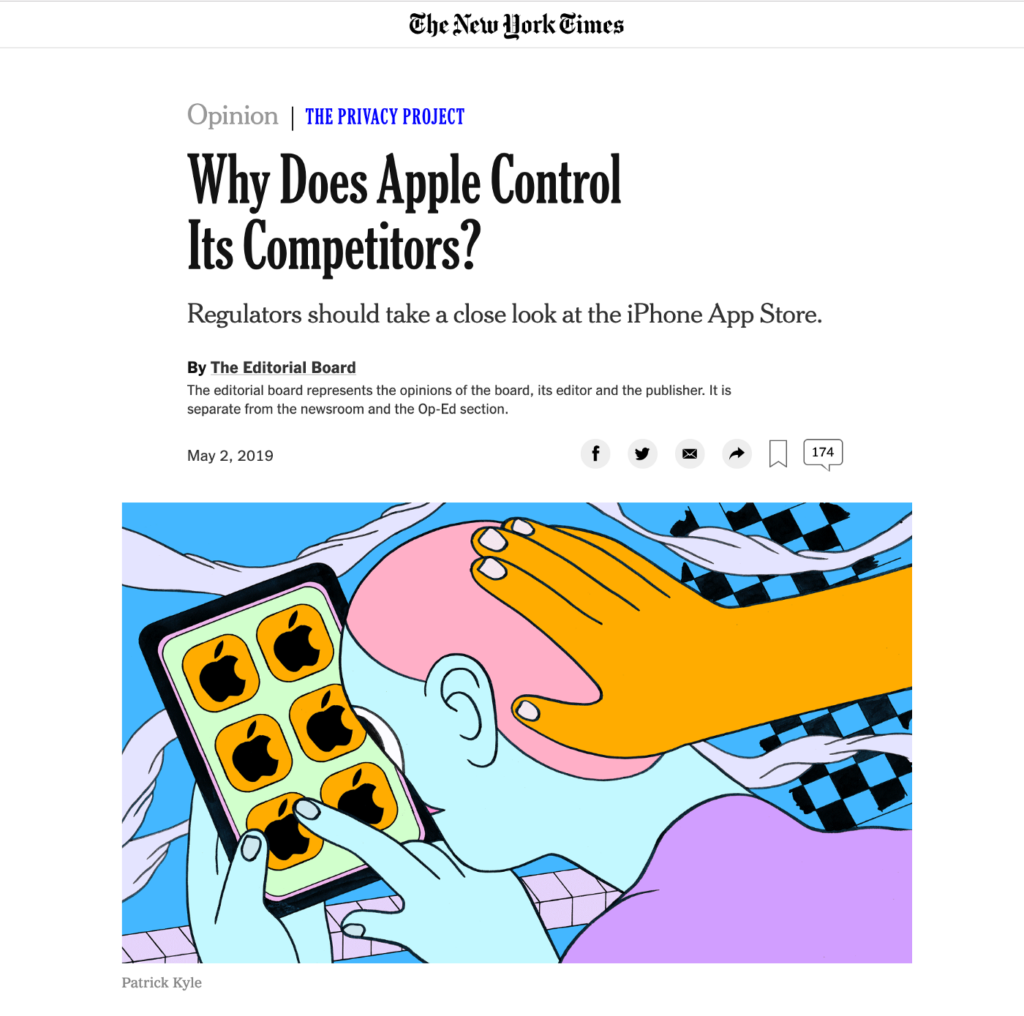 The second piece referenced by the BGR article is an op-ed by The Times’ Editorial Board, “Why Does Apple Control Its Competitors?”

First the op-ed compares Apple to Microsoft. Kind of ironic since Apple was on the brink of bankruptcy in the 1990s:

Apple’s management of the App Store is also dangerously reminiscent of the anti-competitive behavior that triggered United States v. Microsoft, a landmark antitrust case that changed the landscape of the tech industry.

Then the piece complains about Apple’s control over the App Store marketplace and its fees:

But Apple’s operating system for mobile devices makes it almost impossible to get an app outside of the App Store that will work on an Apple phone. Ultimately, the company controls what a user can or cannot do on their own iPhone. Apple also takes up to a 30 percent cut of in-app revenue, including revenue from “services” fulfilled in-app — like buying a premium subscription or an ebook. Because all apps go through the App Store, this 30 percent cut is nearly unavoidable.

Apple doesn’t ban apps like Amazon Kindle or Spotify, which compete with Apple Books and Apple Music, respectively. But the 30 percent fee still stings. That’s the reason you currently can’t buy a Kindle ebook through the Kindle mobile app. Spotify, a much smaller company, now pays Apple between 15 and 30 percent of its in-app revenue in order to serve streaming music to its premium subscribers. Spotify recently filed a complaint with European regulators, accusing Apple of anticompetitive practices. In the United States, an antitrust lawsuit pending before the Supreme Court alleges that the 30 percent cut drives up prices for consumers.

Let’s try this analogy. Suppose Apple is a department store. This department store has products lined up on shelves and racks, organized by sections and aisles so customers can find what they’re looking for. This store has endcaps that feature certain promoted products. What The Times is asking is this: Why can’t any company that wants to sell in Apple’s department store just set up shop inside the store and sell direct? And why should Apple make 30% gross profit on selling each item in the store?¹

(If the department store analogy doesn’t work for you, what about a farmers’ market? The App Store is the market and the developers are the vendors. Organizers of farmers’ markets decide who to allow in to sell, and what they can sell.)

A core of The Times’ monopoly argument seems to be around the fact that the App Store is the only place to get apps that work on an iPhone:

But Apple’s operating system for mobile devices makes it almost impossible to get an app outside of the App Store that will work on an Apple phone. Ultimately, the company controls what a user can or cannot do on their own iPhone.

True. But time and again Apple has argued that its thorough review process is critical to prevent malicious and low quality apps from appearing in its App Store.

And consumers face compatibility or “walled garden” scenarios with lots of things they buy. Printers need specific toner cartridges. Coffeemakers only accept certain shapes of pods. Video game systems can only their own cartridges or discs. In all these examples, including iPhone, consumers can find workarounds. But use at your own risk and don’t go crying to the manufacturer if your product breaks as a result. Fair enough, right?

Even if we take Apple at its word that it was only protecting the privacy and security of its users by removing screen-time and parental-control apps, the state of the app marketplace is troubling. Why is a company — with no mechanism for democratic oversight — the primary and most zealous guardian of user privacy and security? Why is one company in charge of vetting what users can or cannot do on their phones, especially when that company also makes apps that compete in a marketplace that it controls?

But again, I go back to the two-sidedness of The Times. In one breath it wants Facebook and “Big Tech” to be better at preventing the viral spread of horrific imagery, by removing posts with said imagery, thus having a tighter grasp on its own platform. And in another it wants Apple to loosen up its control of its own marketplace. Comparing the spread of a video of a mass shooting with App Store policies is crass, I know. But they are sending mixed messages to Silicon Valley.

I actually agree with The Times about how Facebook and other social media platforms must somehow use technology to combat humanity’s most wretched behaviors. They do need to figure out a way to reign in the monster they’ve unleashed.

However I disagree with their view that Apple must relax its tight control over the App Store, because I want a company that has been the most socially responsible in this age of Big Tech to curate over two million apps in the App Store and prevent me from downloading an app that could brick my phone or expose my private data.

The press plays an important role in our society—to hold powerful entities and individuals to account. However, before lobbing any accusations, before sparking any debate, it really should get its facts straight and understand the material first.

[1] Most retailers mark up the products they sell by 50%. Example: They buy a tube of toothpaste for $2 and sell it to you for $4.

[2] By the way, here are the sellers’ fees for each of these marketplaces: